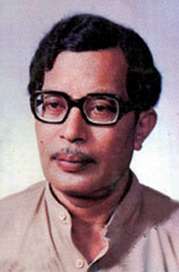 Music composer, late Gopal Yonjon and Narayan Gopal were very good friends. To make the friendship last longer they were bonded together by being "mits" - an unique Nepali custom where good friends enter into a kind of a lasting friendship. Being mit is generally seen as strengthening of the friendship bond between two friends. Narayan Gopal has sung many beautiful and soulful songs composed by Gopal Yonjon.